The Ondo State government under the re-elected governor Rotimi Akeredolu SAN has assured that his administration will continue to raise the banner of excellence of Adekunle Ajasin University, Akungba-Akoko (AAUA).

This was disclosed on the Facebook page of Olabode Richard Olatunde, the Special Assistant to the governor on New Media after a courtesy visit led by top officials from AAUA management.

During the visit, Mr governor bemoaned the running cost of operating three universities in the state but assured that it won’t deter him from raising the bar of excellence of AAUA.

“Running three universities is not a child’s play. We are going through some trying times particularly financial”, the governor said in the report.

In appreciation, Professor Olugbenga Ige, Acting Vice Chancellor said the re-election of Arakunrin Oluwarotimi Akeredolu for another term of four years was consequent upon the sound leadership which the governor has brought to bear on the people of the state. 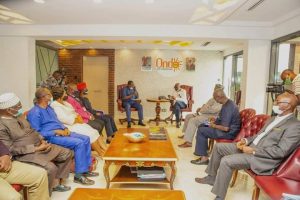 It can be recalled that the State Governor Oluwarotimi Akeredolu ordered the reduction of tuition fees of five out of six faculties in Adekunle Ajasin University, Akungba-Akoko(AAUA) by 20 percent to ease the financial burden on parents during the COVID-19 Pandemic.

It should be pointed out that there was a massive increase in the tuition fees of AAUA during Governor Akeredeolu first term in office as the governor of Ondo State. 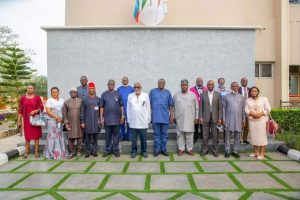 It is worth recalling that  the governor paid a condolence visit to the accident scene that took the lives of many at Akungba community last week.