A student union is the zenith body of students in a higher institution of learning, created for the purpose of promoting and guarding the interest of its members. In Nigeria, we have the National Association of Nigerian Students (NANS) as the umbrella body of all students’ organizations in Nigeria and in the diaspora with the vision of standing and fighting for justice, good governance and the rule of law.

Student Unionism enhances the effort of school management and aids effective and efficient communication between authority and the students. Arguably, student unionism provides a good learning platform for leadership training for the youths.

According to Agbelusi Samuel, also known as Big Sam, he said, “Unionism is the policies and practice of trade Union, particularly those concerned with protecting the rights of workers. This definition is in tandem with labour or trade system, but in actual sense, it also applies to the student community, because Unionism is the policies and practice of the students’ populace particularly those more concerned in the helms of administering student affairs in other to protect and safe guard the rights of student.”

Student Union leadership is formed to promote and defend the welfare needs of the student community in Nigeria Tertiary Education system. A strong relationship exist between Education, Student and Society, students are raw materials fabricated by various educational institutions through an organized systematic training process to acquire essential skills, knowledge and competence.

Arcus Standard dictionary defined a student as a learner who is enrolled in an educational institution. A student is a person who is undergoing a course of study in a particular recognise place of learning. Hence, a student Union is an association of student in a particular place of education with stipulated rules and regulations to guide the modus operandi of the association primarily to protect and defend their common interest in line with society.

Student Unionism is the system of practice or principle and theory of labour Union in an educational setting to pursue students’ interest. A Student Union Leader is a person who emerges through an election or appointed by a caretaker committee to rule or guide and inspire the student body or student community in a representative capacity. Usually, a student Union leader holds a position in the Executive Council for a stipulated period defined by the Union’s constitution.

THE BIRTH OF STUDENT UNIONISM IN NIGERIA

In history, student unionism began in 1925 with the establishment of West African Students’ Union (WASU), initiated by some Nigerian students in London. The first president was a Nigerian, Ladipo Solanke. With the formation of the University College, Ibadan, in 1948, there were efforts to commence student unionism and extend its tentacles to other higher institutions in Nigeria through the formation of National Union of Nigerian Students (NUNS) in 1956 as the national body. It was around the world war and most African countries were under colonial imperialism. WASU campaigned against colonial exploitation, political repression, racism, and social inequalities in West African colonies through the instrument of books, newspaper, articles, magazine and public enlightenment programs, among others, which gradually led to the political independence of Most West African State.

Student unionism in the past was characterised by robust debates, active or passive resistance to the oppressive tendencies of the Authorities. Indeed, those who were the forerunners of unionism then were highly articulate, intellectually inclined, and very dogged in their ways of thinking and actions. Student Unionism in the early days in Nigeria was feared and respected by government, students and various institution management.

Over the years, Nigeria Universities and other tertiary institutions have experienced several student demonstration and unrest, some of them have resulted in violence leading to destruction of public properties, large scale injuries and expulsions.

Student often come back after a protest to live in the same conditions that spark off the protest without addressing their demand. Government and management of institutions responds to students request with brute force leaving behind bitter experience and disaster that would have been avoided. Why don’t we learn from the past mistake?

In 1960, students of the University of Lagos clashed among themselves over the removal of a Vice Chancellor

In 1971, in the University of Ibadan, students demanded the
removal of an official in the University. During the demonstration, tear gas and live ammunitions was used by the police and a student Adekunle Adepoju was shot and killed

In 1998, Students of Ambrose Alli University, Ekpoma, violently protested due to cult activities and it resulted in the death of many students.

In 1978, National Union of Nigerian Students (NUNS), demonstrated over the increase of feeding fees from N50,000 to N150,000 with  placards, the police were drafted with automatic rifles, canisters, the presence of police intensified the demonstration and several students were shot and killed. The news filtered to other Universities and the public and it became a nation – wide protest.

Adekunle Ajasin University Akungba-Akoko (AAUA) students in 2019 demonstrated over 200% hike in tuition fees, the protest by the aggrieved students took a dangerous dimension when they clashed with police officers and it turned bloody. 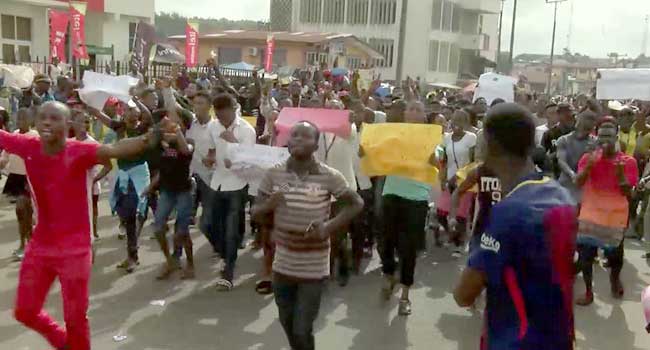 Students, government and authorities of our tertiary institutions all share various degrees of blames in brewing and giving rise to unrest in our
institutions of learning in Nigeria. According to Jega, that the Nigerian Education sector in general has been experiencing a devastating crisis since the late 1970, he stated that the crisis has been characterized by a combination of chronic underfunding, rapidly increasing students’ enrolment, inadequacy of facilities, deterioration of physical infrastructures and suppression in managing the institutions, incessant students’ riots and periodic staff strikes.

These include; deliberate refusal by Government and Management to grant audience to Union leaders on their request for improved welfare needs

CHALLENGES IN THE LEADERSHIP OF STUDENT UNIONS

It is the contention of this paper that Student Unionism today is a far cry from what was practiced in tertiary institutions two or three decades ago. This can be attributed to the socio-economic and political systems in the larger society that has crept into the fabrics of our education system. The following continue to bedevil an effective Student Union leadership and Unionism;

Most candidates do not understand the workings of the Union before presenting themselves for service.

Candidates aspiring for elective offices into Student Unions do not have a well-articulated manifesto for implementation.

Some candidature are driven by personal and economic gains and not service.

Management and Government interference in sponsoring some candidates through the instruments of the institution. Elections are often rigged.

Some credible candidates are wrongfully and deliberately dropped during screening.

There should be a speedy resolution of issues affecting the Student Unions on campus by management and government. Unions should
not be viewed as adversaries but partners towards organizational success, – Jasper(2015)

Introduction of seminars and workshops on leadership training would enhance organizational effectiveness in tertiary institutions.

Student Union leaders should be alive to their constitutional responsibilities, which may include organizing social and sporting activities such as football competitions, beauty pageants, ragging days, cultural events, provision of services and protecting the well-being of students.

Student Union leaders must be astute, fearless and courageous in demanding for the rights of students in a civil manner.

Student Union leaders must know the limits of their powers and cooperate with Management towards achieving institutional goals without compromising standards and the welfare of students.

Management should encourage Students participation in Institutional governance, which leads to organizational effectiveness in Tertiary institutions in Nigeria. The inclusion of students in the day to day running of educational institutions both Federal, State and privately owned will address most challenges. To stimulate good student leadership and organizational effectiveness, the government and management of our education sectors should organize courses, seminars, talk shows and workshops in leadership
training for students’ leaders to assist them develop the skills needed to perform their responsibilities.

Every student is responsible for his or her action while undergoing training in any institution of higher learning. Union leaders and students
alike should remember that their primary duty in the school is to acquire
skills and knowledge. They should avoid any actions that may lead to suspension, expulsion, prosecution and even imprisonment. They should be guided by the oath of allegiance they took during matriculation, which ends only when they have successfully graduated.

Taiwo Faith Olanudun
Taiwo Olanudun popularly know as Tßlaq, is a Political Scientist, a graphics designer with good interest in media and politics
Who is looking up to be a very good human rights activist.
Read This:  ASUU Strike: FG Ready to Renegotiate ASUU Agreement

One Reply to “Student Unionism with Leadership | By Taiwo Olanudun”

Taiwo Faith Olanudun
Taiwo Olanudun popularly know as Tßlaq, is a Political Scientist, a graphics designer with good interest in media and politics
Who is looking up to be a very good human rights activist.