Find something to do

A man filled with so much anxiety, uneasiness and low self-esteem could be repulsive to ladies, right!

In the last part we talked about confidence and how important it is in producing a eye-catchy young man, but there’s a key to it.

Confidence does not come on it’s own accord, it doesn’t grow out of thin air, it rests on other things, which means “doing something“.

Confidence makes a man come on a stage without enough preparation and still deliver a mind blowing speech.

Confidence doesn’t catch you off guard, it catches you doing something. Doing something makes you grow competent, thus the saying “Competence builds confidence“.

One of the first things about a man that puts off a lady is when he doesn’t have anything doing that separates him from the rest.

As a guy, finding something to do is more than doing one odd job or side hustle just to sustain you. It implies working on yourself, it implies going for knowledge, enlarging your coast in various areas. There’s no crime in knowing many things and applying them to your own life.

Truth is many people claim to be engaged with something(s). Nowadays people are always busy, nobody wants to claim being idle but the problem is while people think they are busy they are not productive.

Many are engaged in activities that only help in making time go very fast but in the end they account for little things being done. That’s why it is expedient for a guy to be direct in his activities and not just engage in things that will keep him busy but not productive. So don’t just get busy with your life, get productive.

Developing yourself in many areas is like you preparing for war it makes you fully armed. What do you think will happen when a lady that is inclined to academically sound men finds a guy who is an Art student solving and formulating chemical equations? There’s the possibility of a chemistry right!

Same thing applies to other fields. Sincerely, it’s quite fascinating listening to guys who are Studying a different course discussing extensively another course. As a guy there is the need to be versed.

Here are the (3Vs) you should live by; have value, have virtues and be versed. What makes a man is more than his long beards or deep voice but what he has in his head and how he uses it. 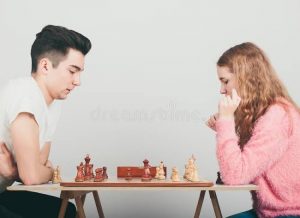 Relationships are really sweet, with all the long chat times, the dramas, disagreements and reconciliations. And when I say “Sweet Relationship” i mean one between two mature minds.

For any confident, well versed guy, carrying the arrow to shoot shots at ladies shouldn’t be a problem, but there are interesting games to play on this “love turf“.

Remember this play song “Who is in the garden, a little fine girl. Can I come and see her, No no no no, follow me a little girl”. Call it hide and seek, call it catch me if you can, call it anything. It’s a love game.

Even with your good qualities many ladies won’t show you that they are head over heels for you, but they would want to play hard to get, so as to become a “Hard Target” just to spice up the game.

There’s always going to be a chase, either the guy chases the girl (or the girl chases the guy) but mostly the guy is the chaser.

So pick up your bow and arrow and go hunting, if you expect to shoot and catch without making a move or showing intention, it feels as if you have been watching the back of the Television when it comes to love games.

This game could depend on a variety of things, as you know ladies are sensitive and for you to understand this game of theirs you’ve got to pocket your ego.

Knowing fully well that you are different personalities from different backgrounds should serve as a guide for you to be equipped with a little bit of empathy for the other individual. Just like someone would say “be Charitable with your reasoning”, try to understand from another person’s perspective, it will help build the relationship when the shot as finally hit the bulls-eye.

For any guy intending to enter a meaningful romantic relationship, first work on yourself, become confident by becoming competent.

Find something tangible doing don’t just be busy without being productive, and be ready to play the game or probably introduce the game with a bit of mystery from your side. So pick up your arrow, lets go hunting.

Relationship is not just about romance alone, you are also relating with other people in the society, that’s the more reason you have to understand yourself before trying to understand others.

Remember, it is not those who try and fail that are called failures but those who fail to try.