The event the Joke undiluted (Introduction ) was held in Adekunle Ajasin University, in Olusegun Obasanjo Multipurpose Hall (OBJ HALL) of the school on the 29th of October, 2021.

The show began with MC Famous when he started cracking some interesting stories, which he used as a means of bringing orderliness among the people.

It was an interesting event in which Mc Evercool did some give away to those standing outside by giving a free ticket. Then he went on by bringing in some Musicians, Comedians and singers such as Omidan Asa, Mc Ayo, Khalifa, peppermouth, mc sagacious, Mc 2go, Mc Dekola, sweet boy fox e.t.c

An interview with a performer at the show, OMIDAN ASA, a female chanter from the department of Mass Communication exposed us to her expectations from the show. According to her “She loves what mofy does and felt really honored when she was invited to perform at his show”. When asked what inspired her to chant and her mood after performance, she mused ” singing, I was inspired from singing and I felt really happy after performing”.

Moving forward, an interview was also conducted with Ajayi Dekola Emmanuel known popularly as Dekola. During the interaction, he revealed to us the closeness between Mc Mofy, the host, and him. He divulged that the show would have be held earlier, when the host was in his 200 level but then he wasn’t ready. When asked what he expects from the show, he disclosed, “comedy and nothing else”. He also performed in the show.

Also, the event witnessed a Dance competition which was initiated by Mc Ever cool and two winners were announced and given the sum of Two thousand, five hundred naira each, 2500. Different hip hop songs by popular musicians was played by DJ frosh and the students sang along, having lots of fun.

To know how they felt about the show, a student named Oluwatoyin, also known as sacriod of 300 level, English and literary studies was interviewed. She said ” I anticipate so much from the show as Mc mofy is a bunch of characters and she doesn’t regret coming to the show”.

Around 7pm, Mc Mofy’s mother and aunt was ushered into the hall and was acknowledged by Mc Ever cool. 10 minutes later, the host was present at the show and he was met with lot of cheers, applause and yelling by the students. He was obviously loved by them all. He appreciated his mother who took care of him singlehandedly since age 9, after the death of his dad and also thanked AAUAites for coming out to support him. He made some jokes too.

40 minutes later, it was announced that the icons, Mc Freedom and Mc remote who came to grace the student with their presence were around and 10 minutes after that, Mc Freedom came to the stage. This attracted lot of noise and screams. Everyone was happy to see him. He cracked some jokes and made the student feel totally at ease.

Mc Remote came next and also vibed with the students and left the stage after sharing parts of himself there.

AAUA INSIDER had an interview with the host to unfold the thoughts of the show.

Insider; Can you tell us your full name?

Insider: Any alias or nick name?

Insider: Which department and level are you?

Host: 300 level from the department of English and literary studies.

Insider: Were you expecting this large crowd at your show?

Host: No ooo, I was even scared. I was so scared.

Insider: Are you happy at the outcome of the show?

Host: I am so happy and grateful to God.

Insider: How was the reactions of the celebrities when asked to perform at your show?

Host; Real cool. I was actually nervous meeting Mc Remote but then I realized he was friendly and a Gentlemen.

Insider: Do you plan on holding a show like this again?

Host: Sure. You people should watch out for jokes undiluted chapter one. This edition was “The INTRODUCTION”, you will get this if you are a literature student.

Insider: Give a big shout out to people you love.

Host : A big shout out to God, my mother and every one who came to the show.

Insider: What do you say to AAUAites?

Host: I want to say thank you to them. They are very supportive and I won’t take their love for granted.

So, here we have it, a show at AAUAites that would surely be on the lips of all students for a very long time.

MC Mofy thrilled students and guests with his first ever show and performance.

Below are pictures of the event 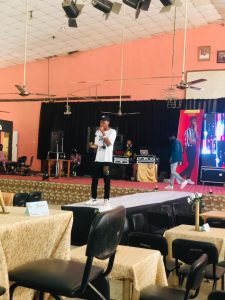 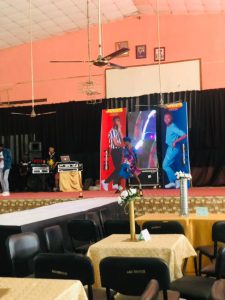 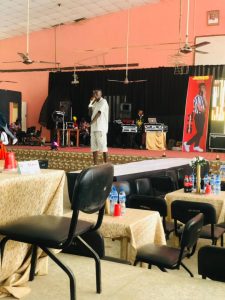 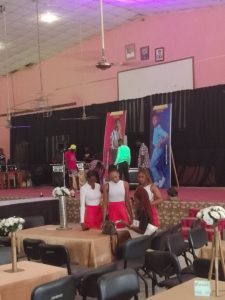 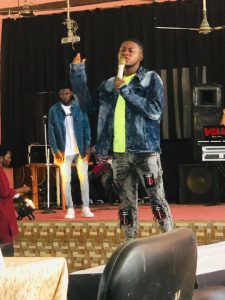 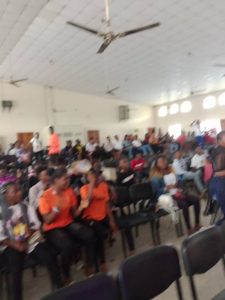 Omotosho Gloria popularly know as Dabira. A political scientist, a writer that covers Entertainment, AAUA hoes and Interview beats for AAUA INSIDER.Also looking up to be a very good human rights activist.

Omotosho Gloria popularly know as Dabira. A political scientist, a writer that covers Entertainment, AAUA hoes and Interview beats for AAUA INSIDER.Also looking up to be a very good human rights activist.

Filmmaking, especially a serial storyline, can be a project with lots of stress -even for established stars. But Bisola Akintomide -a final year student of…