The students of Adekunle Ajasin University, Akungba-Akoko, have cried foul over the exorbitant charges from the sporting unit to officiate a match before one can make use of the sports complex, most especially the use of the football field.

This new development has caused uproar among the sports lovers who now find it stressful and expensive to use the University’s football field for their extra-curricular activities because of the high cost of officiating fee charged by the administrators.

AAUA INSIDER reports, after going through some investigations, that this development began while Adelowo Adebayo (Lovebayor) was the Sport director during the Obagunwa Oluwasegun (Supreme) led administration.

Comrade Lovebayor was said to be informed of this development when it began with the policy of writing a letter before any facility in the sports complex can be used and the administrators took advantage of the policy to charge before officiating a match.

This policy has now seen some university staff attached to the sporting unit extorting students despite submitting a letter to use the sports complex and also to officiate a match.

AAUA INSIDER reports that at least the sum of two thousand naira (₦2000) is being charged per match for officiating a match and also the use of the football pitch.

In a match observed by AAUA INSIDER correspondent, the match was said to be played after getting the approval to use the football field. However, the organiser of the said match paid a sum of five thousand naira (₦5000) for staff to officiate the match.

AAUA INSIDER reporter took a step further to visit the sports complex and hear the opinion of students regarding the exorbitant amount charged by the sporting unit to officiate a match and also have a chat with a few affected students. 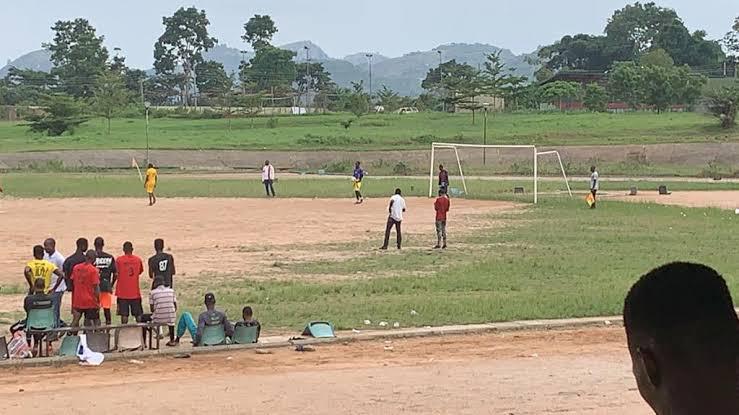 In a conversation with an affected student, Olabisi Adegoke*, he explained how he has acquired debt just because he is yet to complete his payment after he was allowed to use the football pitch for the competition he organized which the sum of ninety-six thousand naira (N96,000) was charged in total to officiate the matches played during the competition.

Also, in a chat with one Peter Samuel*, he complained how the officials charged at least the sum of two thousand naira (N2,000) just to officiate a friendly match.

However, this development has led to a low turnout of people using the field as some students cannot afford the exorbitant amount that is charged from them neither to use the sports complex nor to officiate a match.

As at press time, all efforts proved abortive to reach out to the officials nor the head of the sporting unit. Also, a letter written to the officials to request for match time is yet to be attended to.

One Reply to “INVESTIGATION: How Sports Complex Officiating Turned To Extortion Avenue In AAUA”