In this exclusive interview with one of the creative entertainers in AAUA and the winner of the AAUA Insider’s Most Outstanding Student In Entertainment, Adekola Ajayi, popularly known as MC Dekola, he told this reporter how he started the renowned Laff O’Clock programme. Excerpts…

Kindly give a succinct introduction about yourself.

I’m Ajayi Adekola popularly known as MC Dekola. I’m a 400 level student of Criminology and Security Studies who hailed from Ibadan and the fourth brood in the family of seven. I’m a comedian, MC, and event planner. I’m the organizer of an annual popular stage comedy program known as Laff O’clock.

Briefly tell us about when you started the program ‘laff O’clock.

I began my first edition of Laff O’clock show in 2018 which I titled the explosion. In 2019, I had the second edition titled coming crazy drama and in 2020 as follows, I had my third edition which I titled father Christmas in February, and had Woli Arole as the guest. In 2020 again, I had another edition titled O’Nigeria my country in October 2020 and the present one which I called the fifth edition titled ‘why una dey lie’ coming up on the 10th of October, 2021.

What prompted you to choose comedy as a career?

What’s your aim for organizing this program (Laff O’clock)?

Basically, I’ve been concerned about putting up shows on campus while I was processing my admission into AAUA.  It is a comedy show where the audience is entertained by several performances showcased by distinct guests. One of my aims is to make upcoming artists on campus get acquainted with some invited celebrities basically for assistance. Most of these upcoming artists are found during their performance at the one mic show that is observed every Friday on campus. 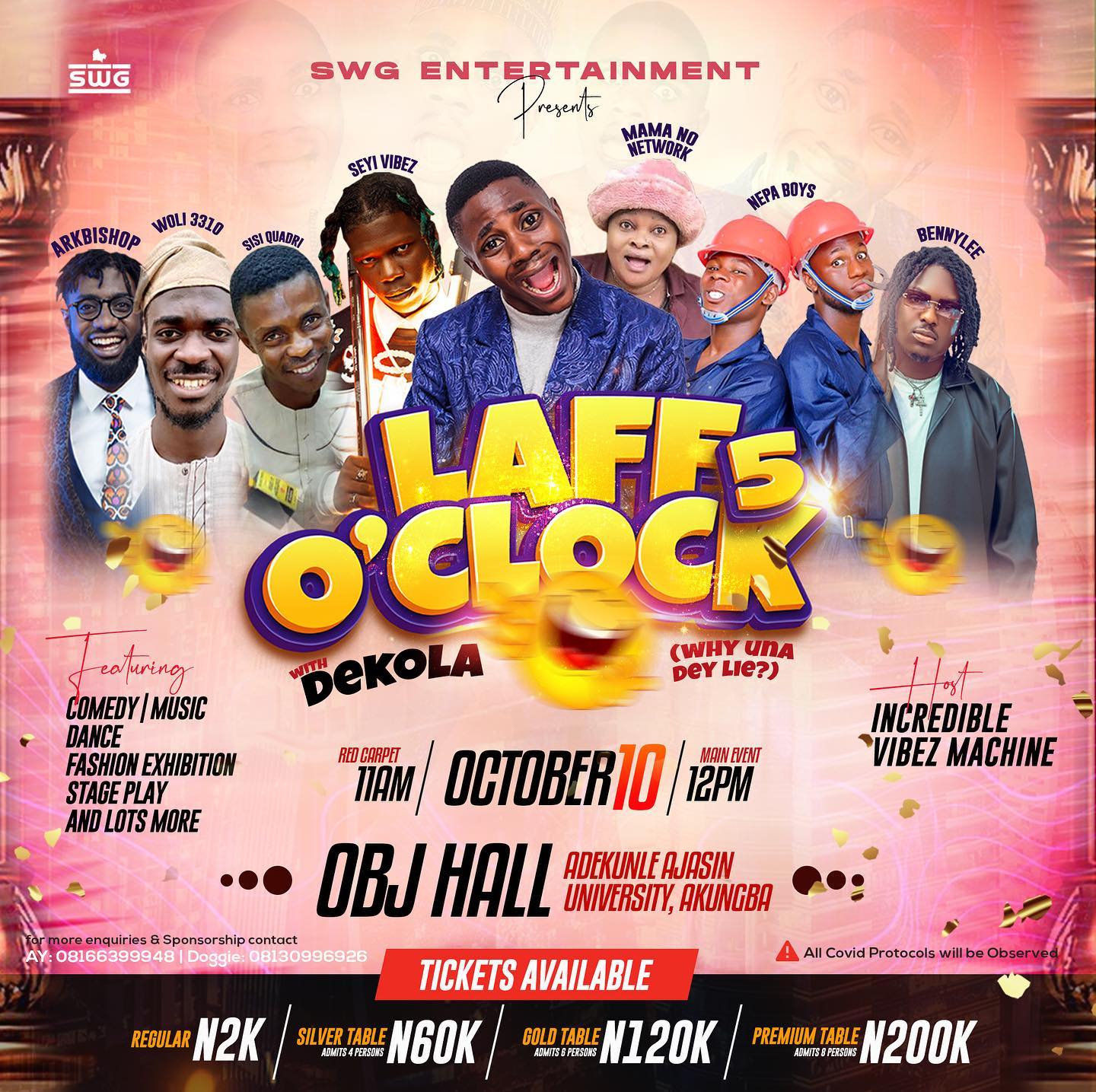 This year’s edition is going to be totally different because 15 celebrity guests are invited, seven among them are popular celebrities while the remaining eight are upcoming celebrities. So with this, I think students can get acquainted with some artists as well as being assisted by them all through their career. The reason for organizing the show is because I want people to be reached through my talent and spread laughter across the world.

Secondly, the reason for organizing this show is because I want people to be reached through my talent and spread laughter across the world.

Would you choose comedy as a career after your studies?

I will surely focus on my career as a comedian, MC, and event planner after school regardless of my brilliancy as a student’.

What message do you have for people?

I’ll admonish people like me that are zealous or have a passion generally for comedy and event planning to be focused and not be distracted. There are so many distractions but it’s good to remain focused because it pays off.