An auspicious group, Forbidden Topics in partnership with Secure Our lives has urged the government and institutions to embrace the habit of fighting against violence and insecurity in tertiary institutions and in Nigeria at large.

This charge was made at the roundtable talk speak against insecurity and violence at the volleyball court of Adekunle Ajasin, university, Akungba-Akoko.

Speaking at the programme, the state coordinator, Oluwadamilola Akintewe, said the program was organized to bring to the awareness of the government on the insecurity that is becoming more alarming in the country’s state tertiary institutions.

Oluwadamilola further stated that some of the issues facing tertiary institutions are numerous such as sexual assault, rape, and act against the mode of conduct of the school such as coloured hair, tattered trouser, and late coming to exams hall is also against the school mode of conduct.

When she was giving her opening speech, she said she will be glad if we can curb the possible solutions and issues facing insecurity, using Akungba as a case study.

She gives a brief story about herself her experience in Akungba in the area of insecurity.

She identifies herself as Oluwadamilola Akintewe a student of Adekunle Ajasin University from the Department of Law, shared her story about what happened some years ago in Akungba around RCF when someone comes towards her and robbed her. At that particular period, her phone was stolen, she said at that very moment, she was down because she felt unsafe that she could be attacked on her way coming from the church program around 7:30 pm.

She further noted that another issue facing Akungba community, even (AAUA) is what they call express air wire.

She then concluded it by saying one of the most commonly used languages among people who are politically apathetic do say ‘’No sensible women will love to vote by former USA president’’.

Arike Temitope introduced herself as a hairstylist, a student, an entrepreneur, and also a politician.

Last month I went for modems in APC and were trying to discussing something, in that process, someone said from a corner and he said, “Don’t mind them they are females.”

Even when I was searching for a job and the woman said what do you people know than sleeping with guys and even in school here, I know how some of the staff of the institution down at us as there is nothing in a female.

Psychologically, most women see their fellow female as a competitor, by pulling them down.

Even in power, those who attack you are always the female

Bello Mary who is from the Department of Guidance & Counseling said the activities of the Islamic sect (Boko Haram) Kidnappers, the bandit had led to the loss of lives in the country, most especially in the northern part of the country.

According to her, “Rape, Molestation, Robbery, and arrest of a student who is protesting peacefully are also violence”.

Furthermore, she affirmed that assault of students by fellow students such as accusations of others like missing of phones and among others.

Fear of walking with strange faces in the evening with the fear of been raped, kidnapped, or been robbed.

For over a decade, Nigeria has been fraught with insecurity challenges, from Boko Haram and their ISWAP counterparts to Bandits and unknown gunmen, in the midst of all this, the statistics of unemployed youths and graduates in the nation has been rising at an alarming rate, the basic development infrastructures like.

Insecurity and terrorism have been a major challenge to the Nigerian government in recent times. The activities of the Islamic sect (Boko Haram) had led to the loss of lives and properties in the country especially in the Northern part of Nigeria.

Some of these activities include bombing, suicide bomb attacks, sporadic shooting of unarmed and innocent citizens, burning of police stations, churches, kidnapping of school girls and women, among others.

Kidnapping, rape, armed robbery and political crises, murder, destruction of oil facilities by Niger Delta militants alongside the attacks carried out by Fulani Herdsmen on some communities in the North and South have been another major insecurity challenge facing the country. Nigeria has been included among one of the terrorist countries of the world.

Many lives and properties have been lost and a large number of citizens rendered homeless. Families have lost their loved ones. Many women are now widows. Children become orphans with no hope of the future. This has implications for national development. The government had made frantic efforts to tackle these challenges posed by terrorism and insecurity in the country and put an end to it but the rate of insurgency and insecurity is still alarming.

The events surrounding September 11, 2001, and other recent events of terrorism across the globe especially the current wave of terrorism in Nigeria, had focused our minds on issues of terrorism and insecurity. This study, therefore, investigated empirically the challenges of insecurity and terrorism on national development in Nigeria. The scope of the study spans from 1990 to 2012.

Data used for this study was sourced from the Central Bank of Nigeria (CBN) statistical bulletin, Newspapers, and related journal articles on security issues. Using the ordinary least square method of analysis, the result showed that terrorism and insecurity impact negatively on economic development. It has made the government divert resources meant for development purposes to security votes.

Expenditure made by the government on security matters had significantly and positively impacted economic development implying that expenditure on security matters has helped to ameliorate the negative effect of terrorism and insecurity despite the fact there is a crowding-in effect of security expenditure on economic development. This finding is in line with other studies on different countries of the world. It is therefore recommended that government should declare war on terrorism and seek assistance/advice from international communities who have in the time past faced this kind of challenge and were able to tackle it.

The Nigerian Military should be empowered more with arms to fight this insurgency. Government should beef up security in the eastern and southern parts of the country to curb the menace of insecurity. Grazing grounds or/and ranches should be built in all states of the country for Fulani herdsmen who rear cattle.

There should be workers for stuff like this. Students should endeavour to inform their peers. Because the country is not safe. Reasons to believe there are more women who are ready to fight. Speak out. Learn Self Defense. Giving young people a platform. The government takes heed to the advice of young people.

Picture from the programme below: 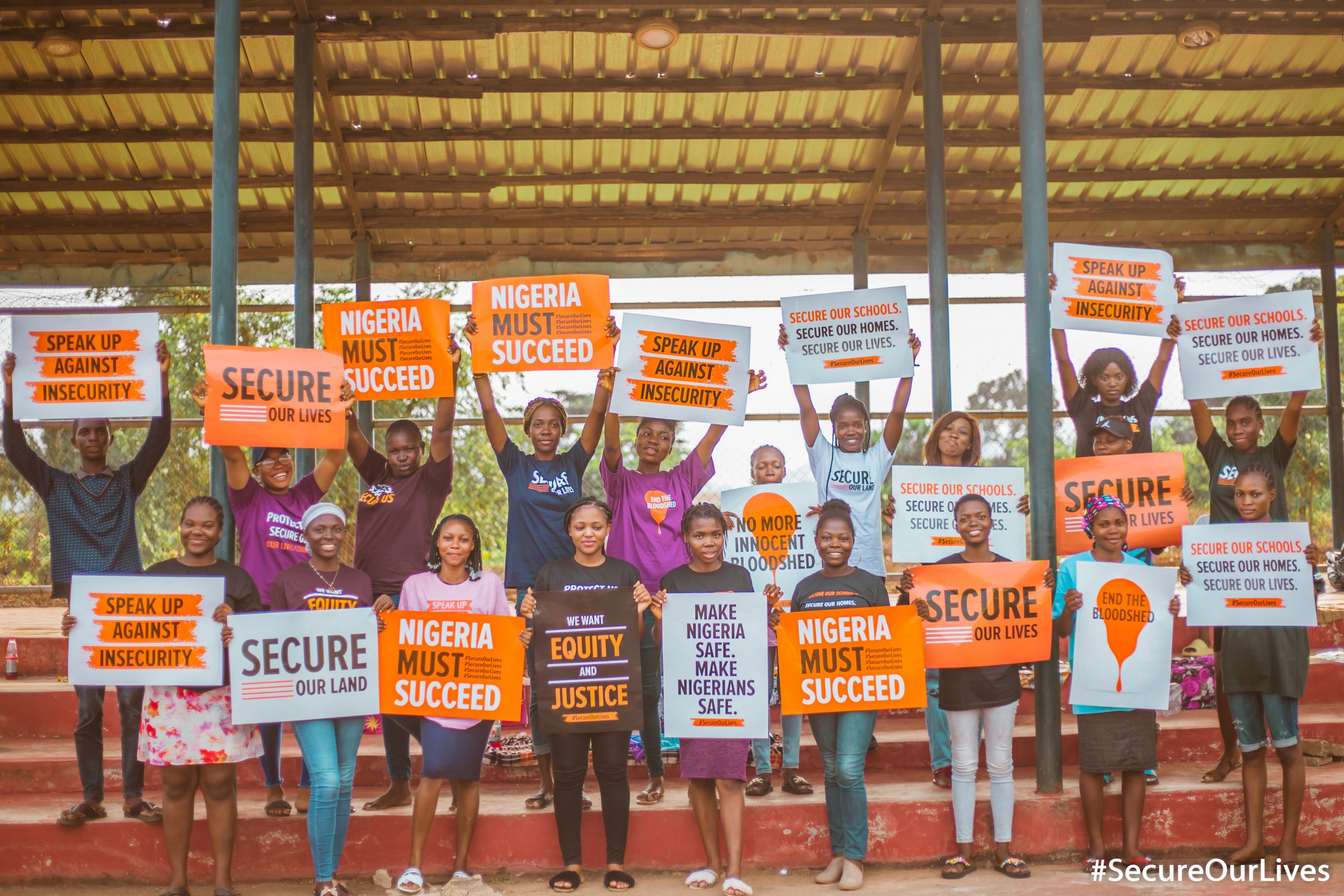 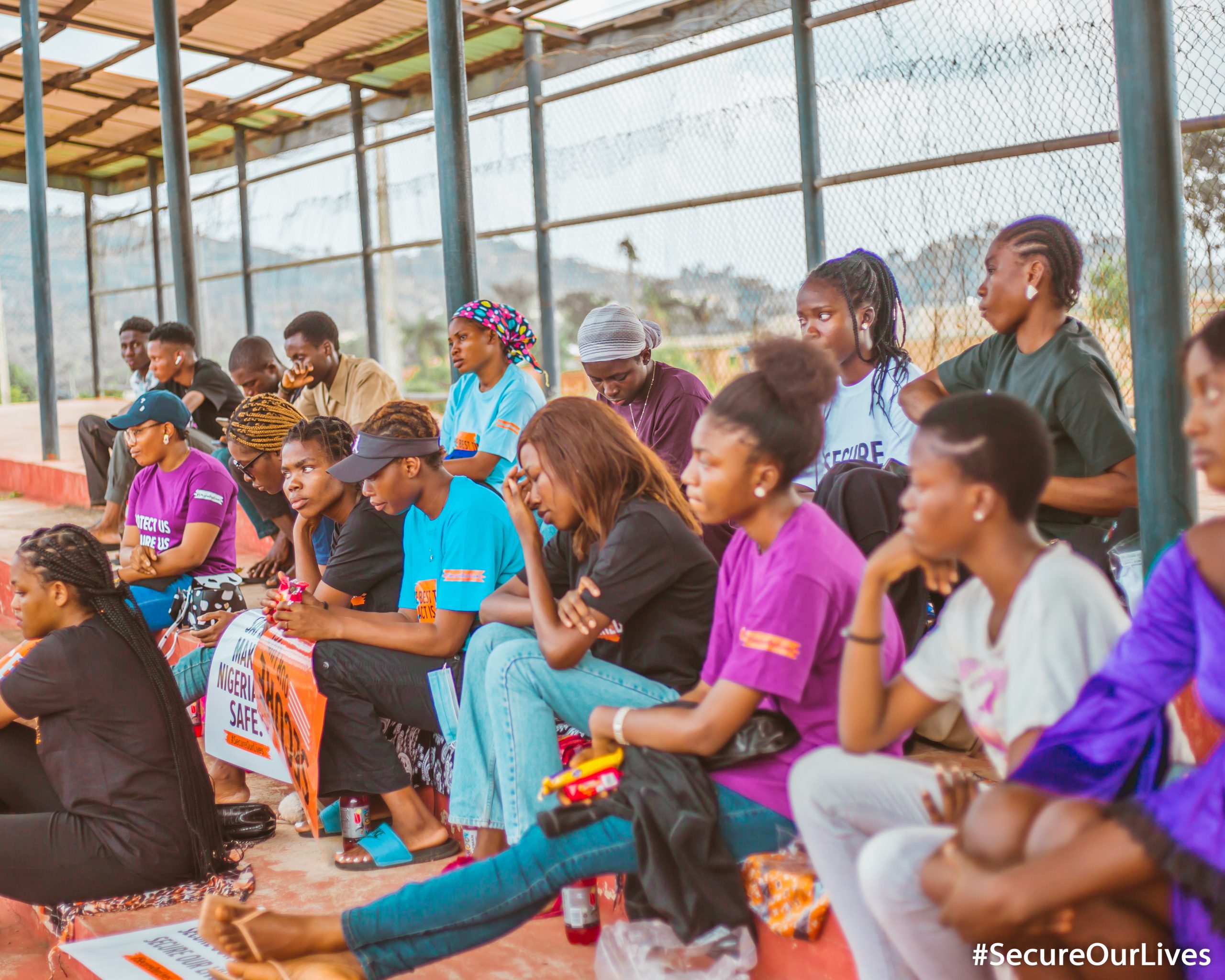 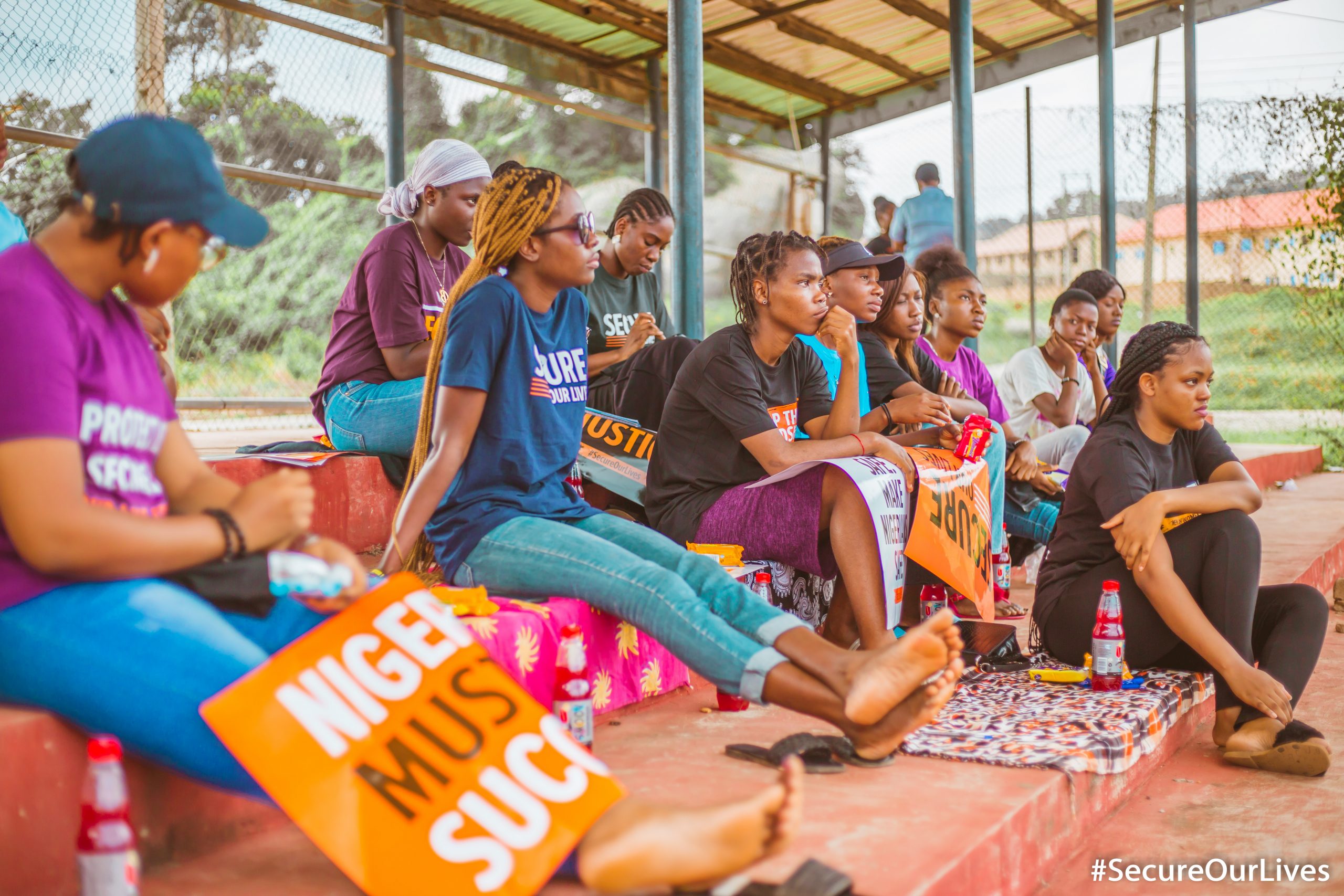 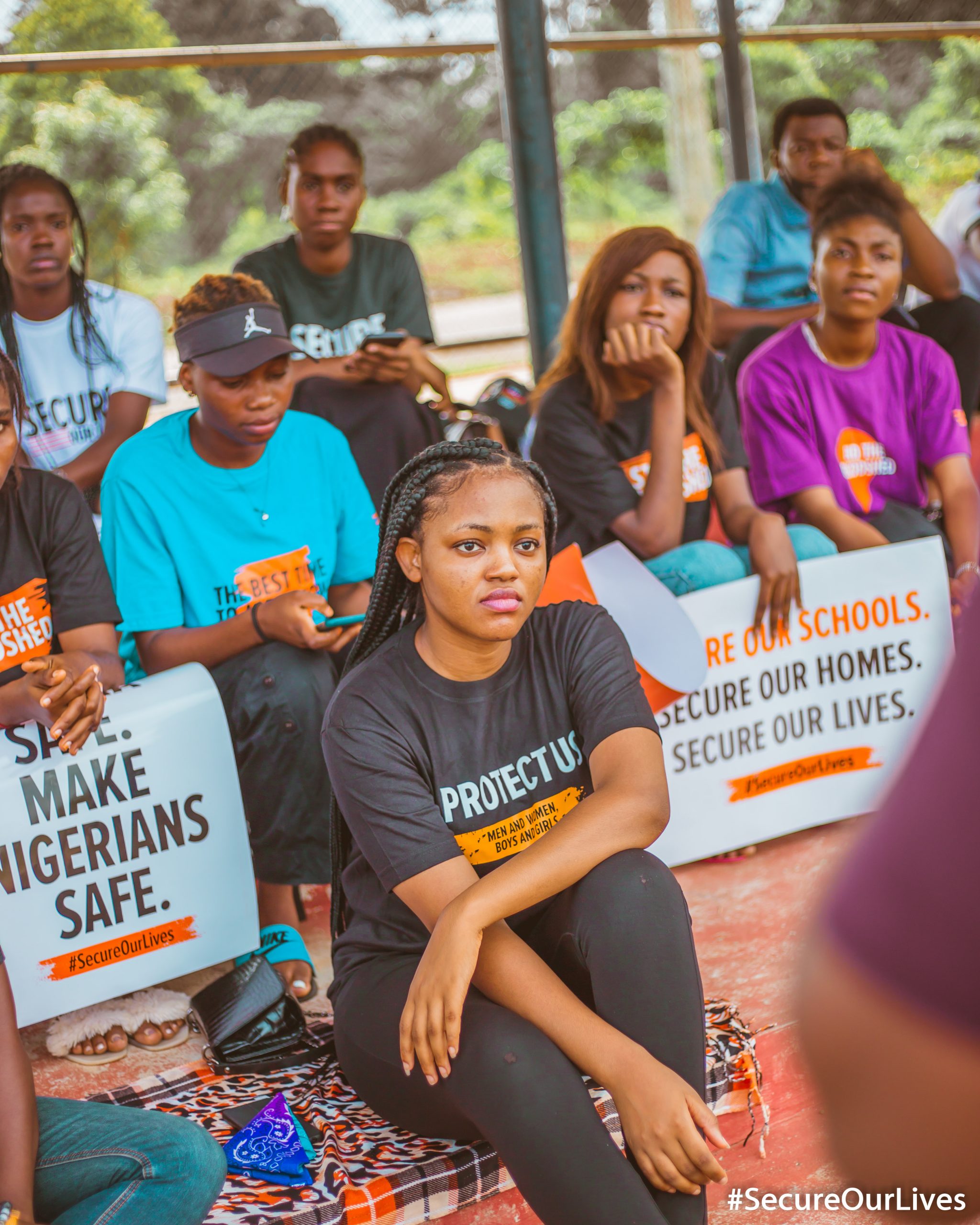 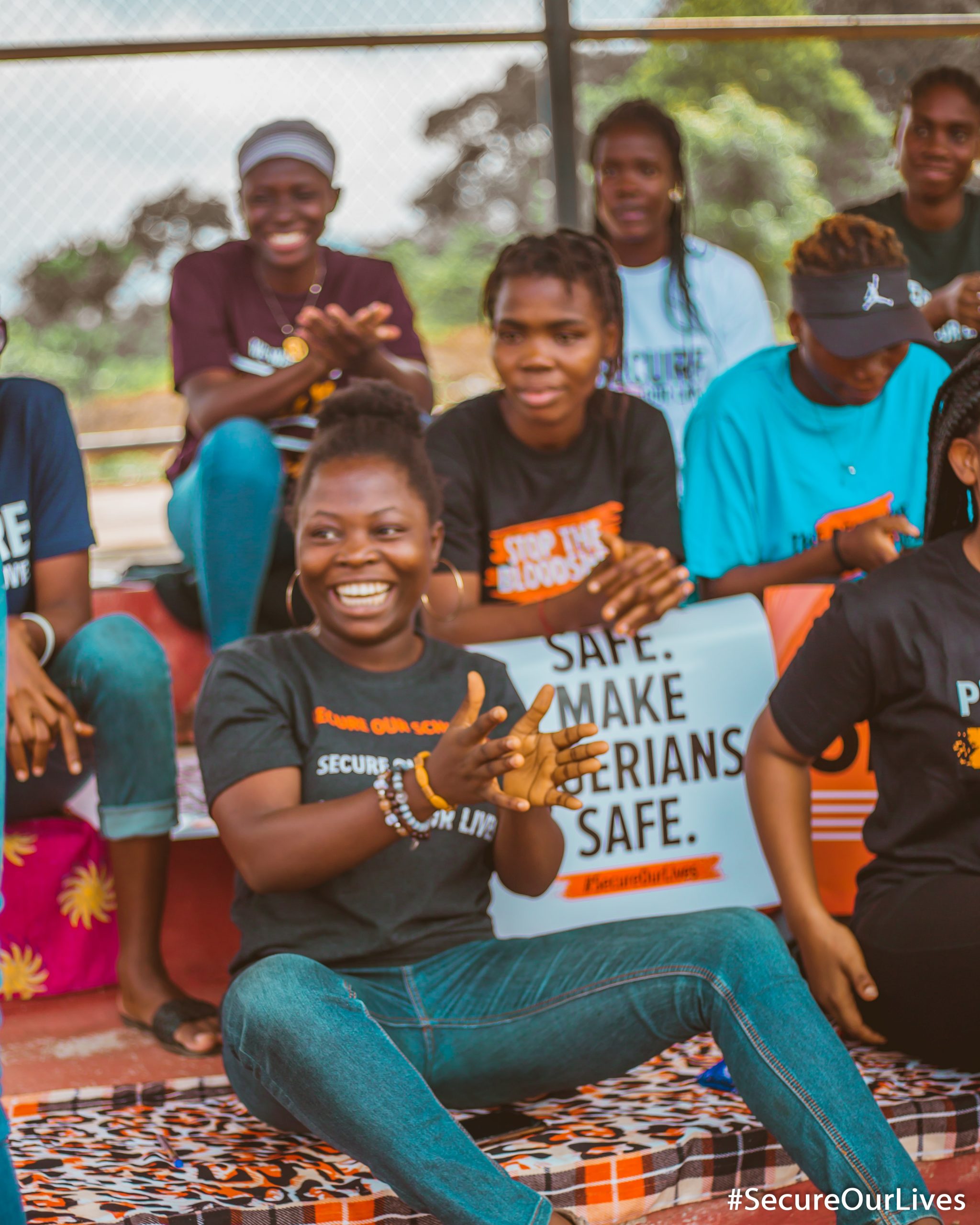 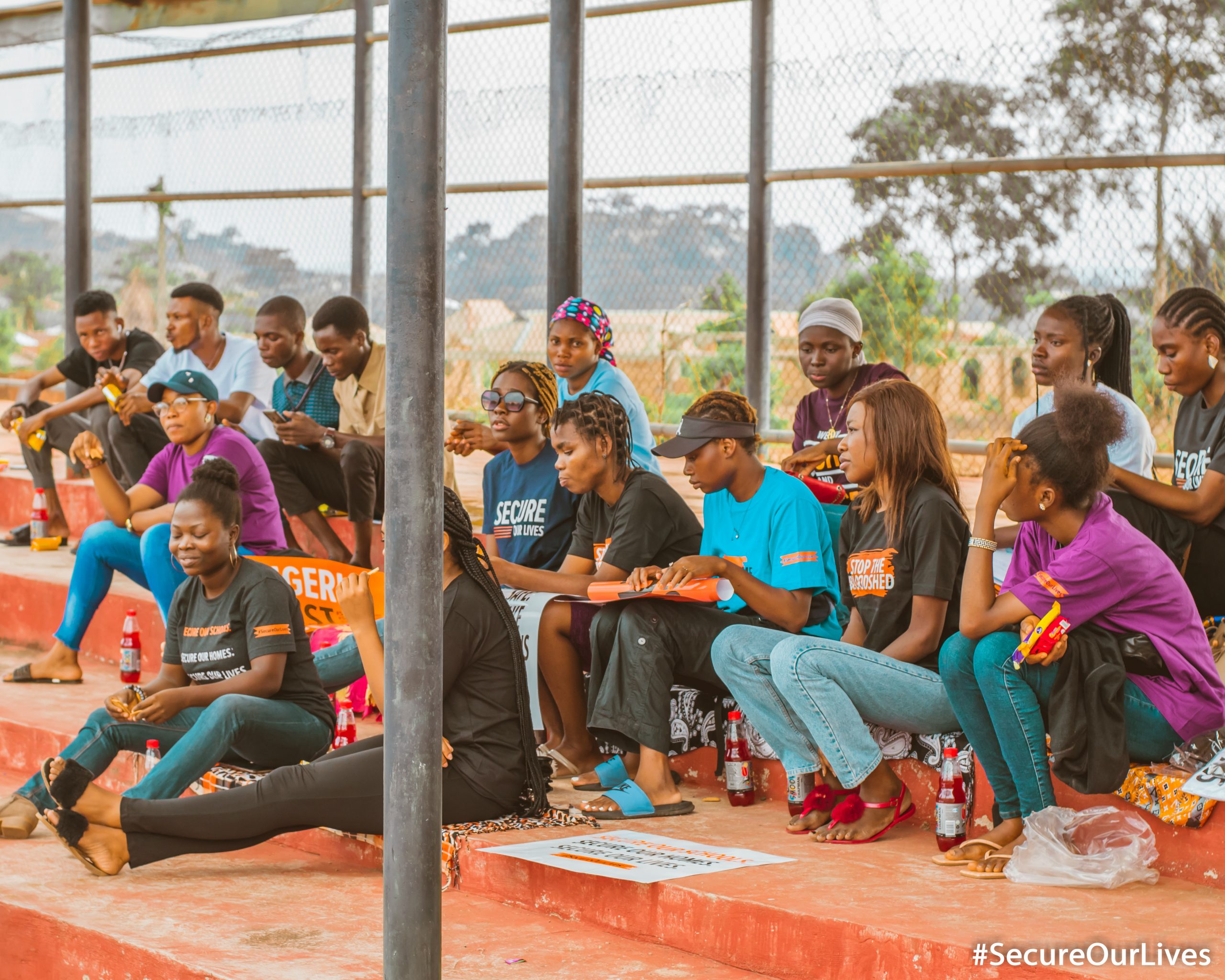 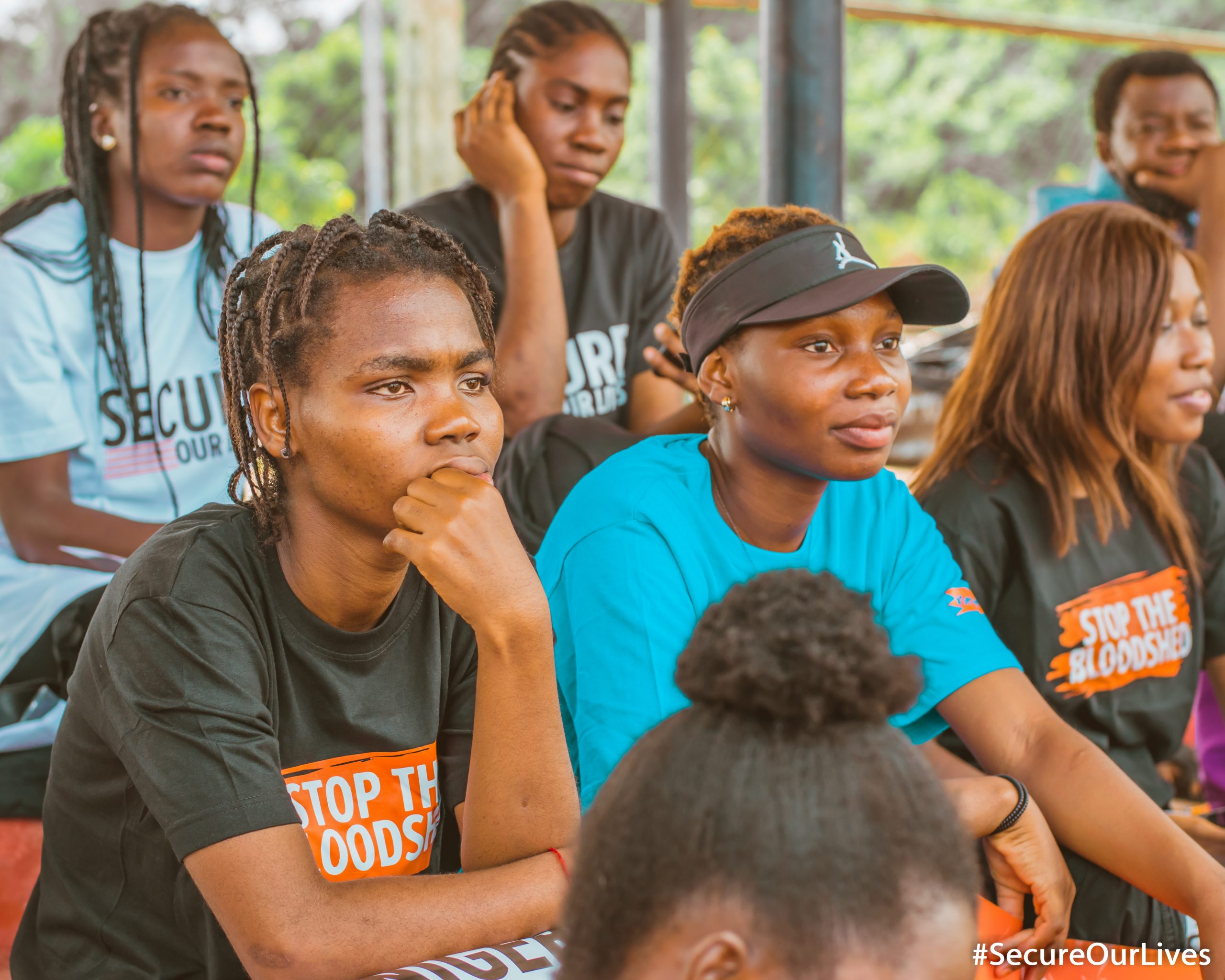 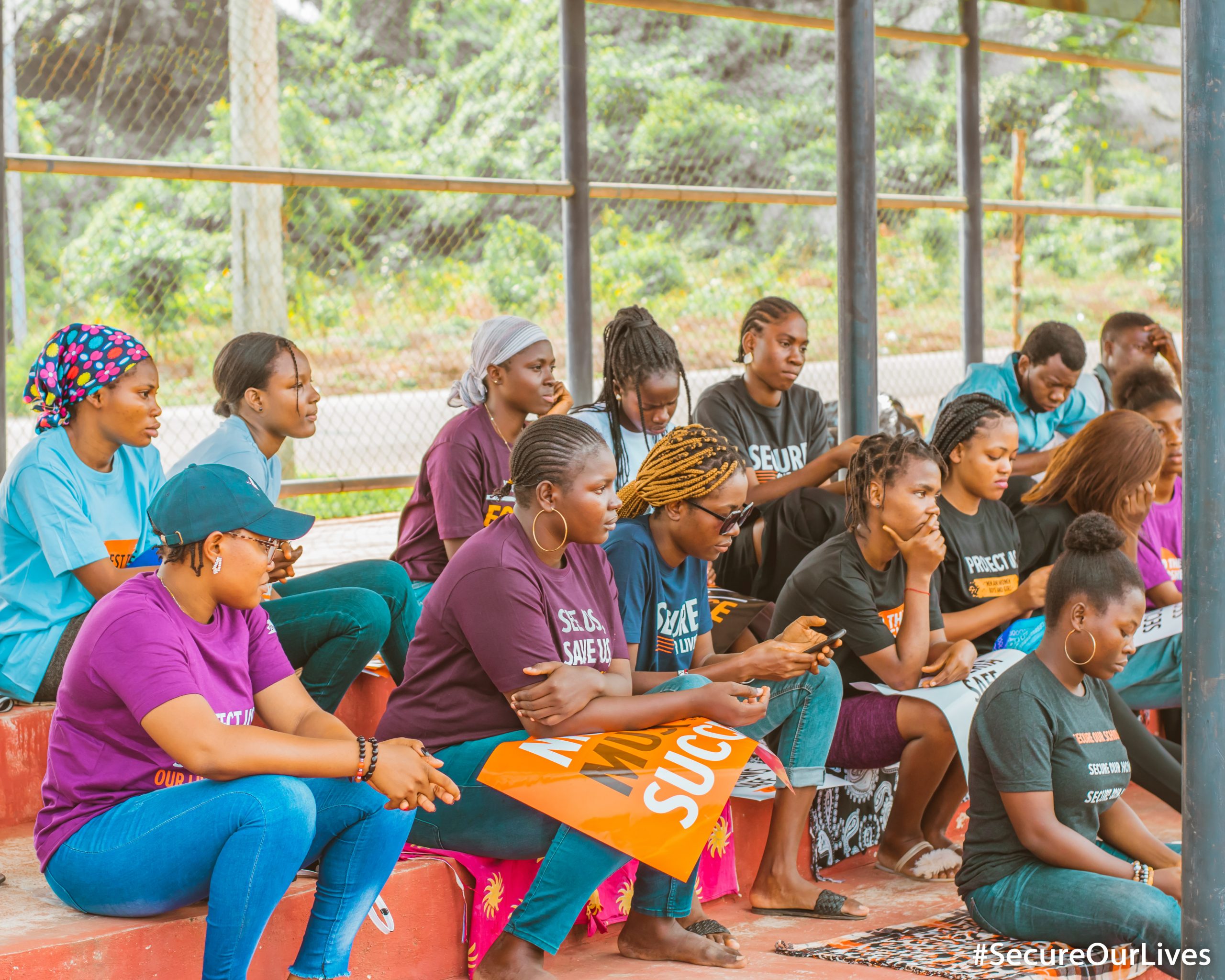 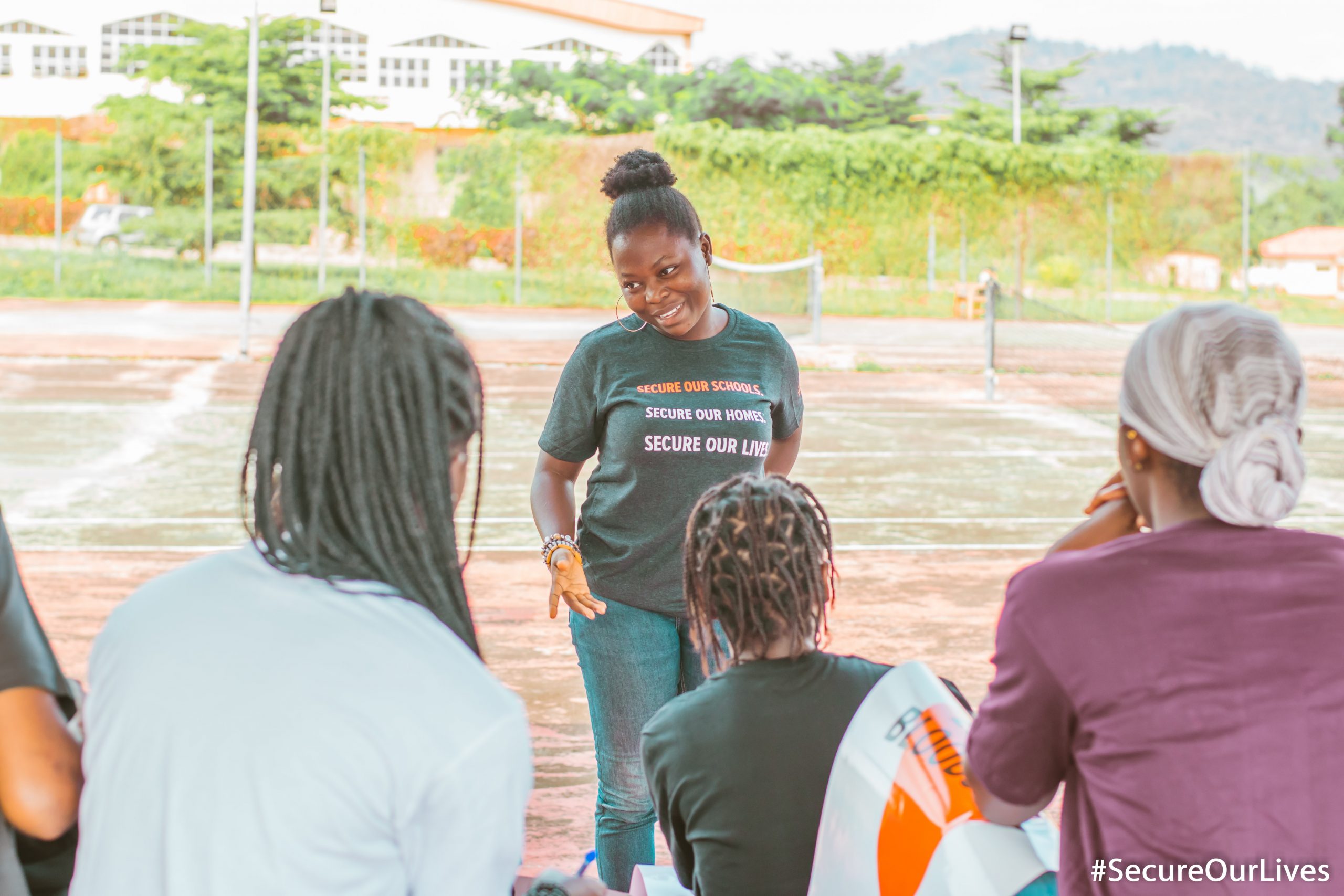 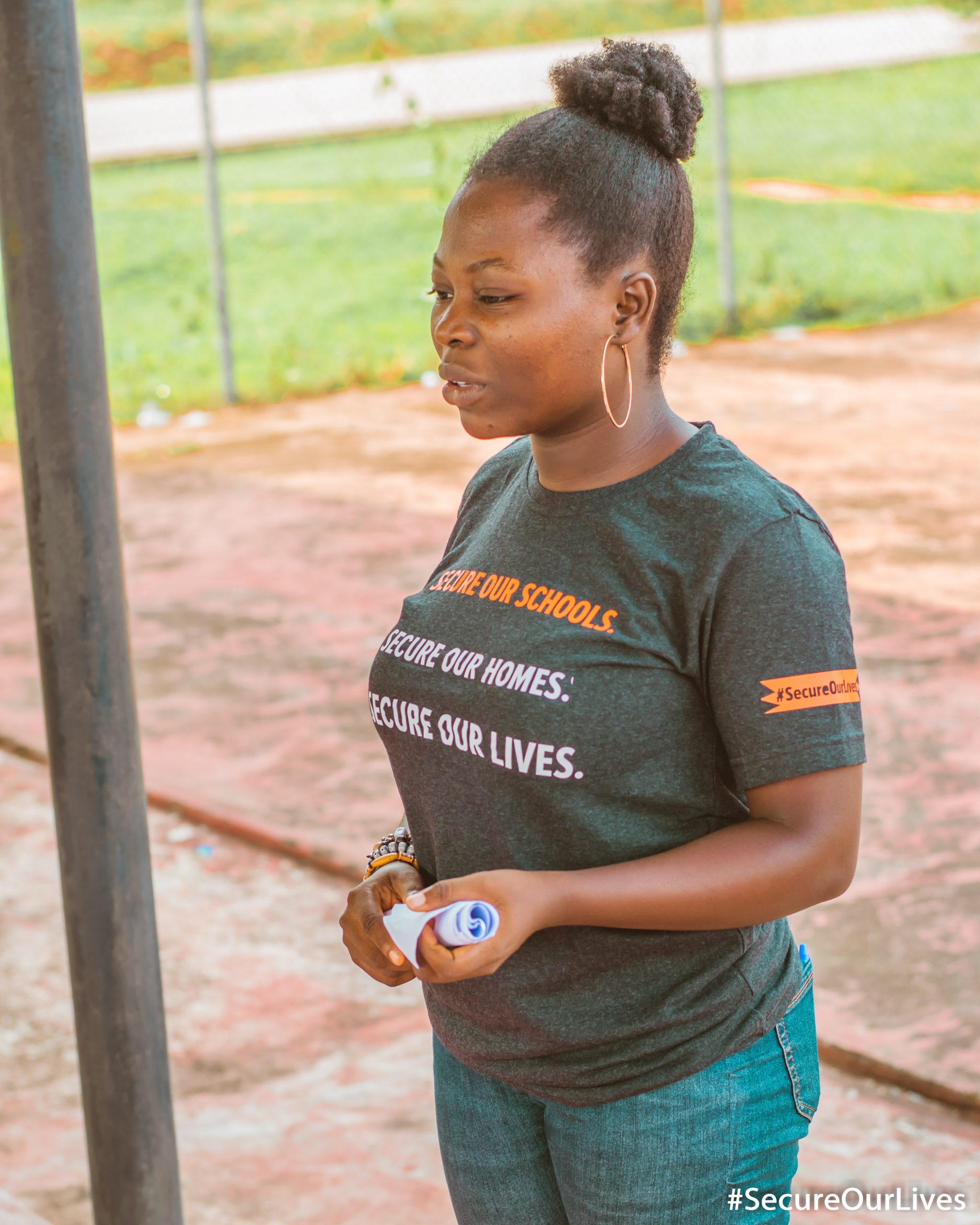 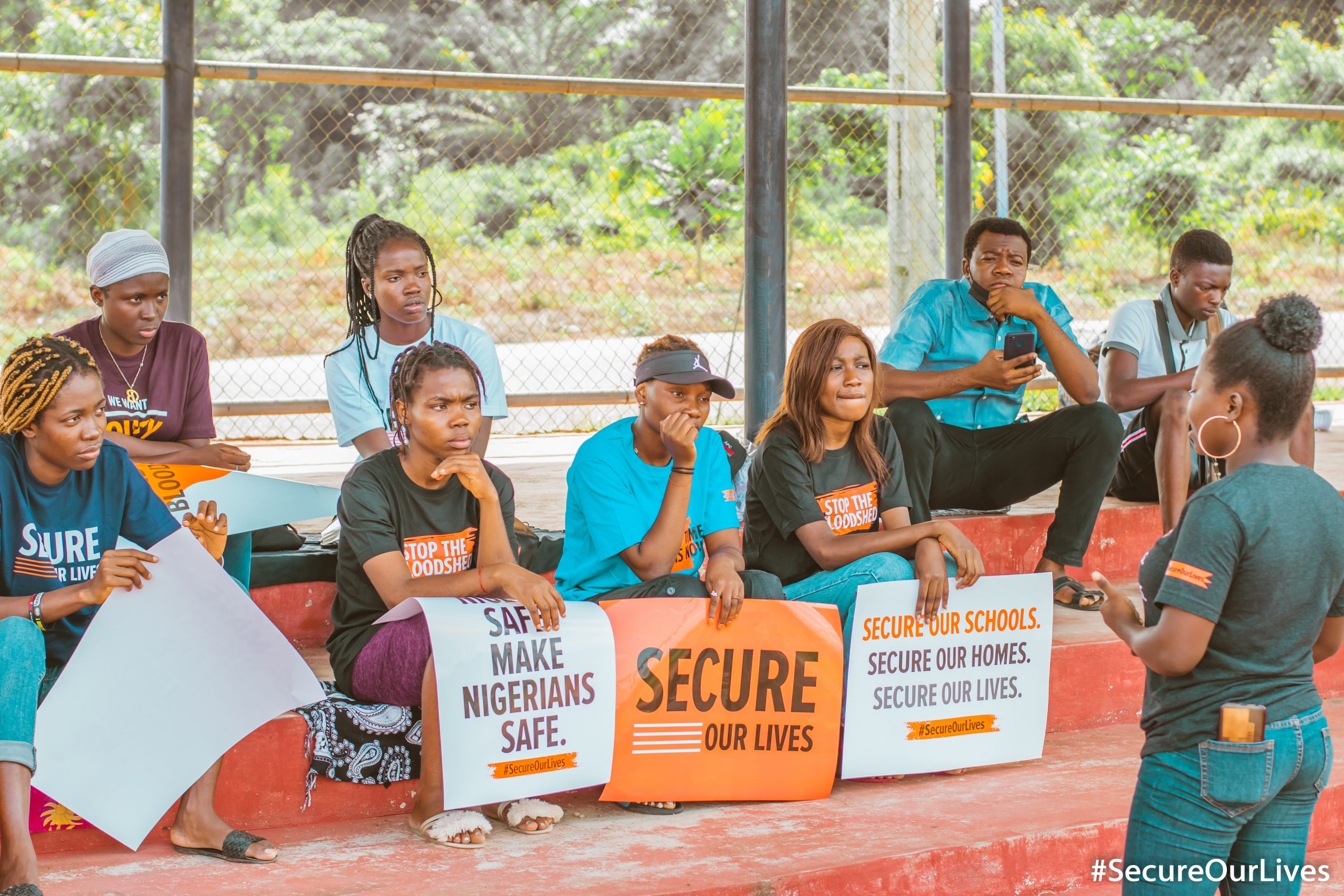