About 5pm on Saturday 23rd January 2021. Phones started beeping with calls and notifications, group chats filled with messages and panic, the whole community turned body count estimators. Something had happened again on Akungba road. A regular face was involved in an accident claiming many lives.

It’s not a new sound to the ear that Akungba-Akoko, the host community of Adekunle Ajasin University (AAUA) is bedevilled with series of accidents involving heavy duty trucks plying the road on daily basis. The presence of these trucks had always brought serious damages to the community.

It would be an understatement to say that AAUA students felt the heat of what happened. Instead, one could say we were thrown inside the fiery hot lava of losing fellow students.

Beyond doubt, emotions flowed as tears rolled freely on the cheeks of students and the indigenes of the town at the sight of this gory incident.

Just as any other community thrives on trade, Akungba-Akoko a town with a large population of students also does well in trade, but buying and selling here comes with a price, which is doing so on a road in a deplorable condition.

Survival is no doubt the reason for the continuation of commercial activities on this road, but it is rather sad that things happen as a result of this seemingly recurring incident.

However,vwhile some people are lucky to cheat death and miss its blow by the tip of their hair, others are not very lucky.

On 23rd January 2021, two days to the start of the rescheduled exam, another accident occurred beside the school’s main gate, involving a Dangote trailer transporting bags of cement.

It was reported that the heavy truck developed break failure and this was noticed as it descended down the hill without any form of mechanical restraint, plunging into the shops situated around the main gate.

Atleast 13 lives were lost which included a number of students, of which the immediate SUG President, Samuel Adesomoju popularly known as Sampraise is of prominent mention. The entire community was thrown into great disarray.

Akungba road was painted red with the blood of people going about their daily businesses. This ghastly accident took from the institution the precious lives of students trying to make for themselves a better future.

As citizens gathered in their numbers to assess the situation together with the men of security agencies, efforts to rescue the injured as well as bring out the dead were intensified.

And as the search and rescue continued, it became clear that some people had fiercely resisted the cold hands of death and were taken to the hospital to receive treatment. But for others, their bodies succumbed to the sting of Death, their eyes shut to a world they held so dear, to a life they dreamt of building, all within a twinkle. 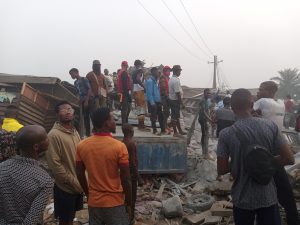 Students resolve to the incessant accident.

After the accident which many students see as the most brutal in recent times and a big blow to the image of the community, emotions had began to flow in many directions.

In the midst of the chaos; thoughts of fear, anguish, bitterness, and a mixed feeling of luck had gripped the hearts of students who gave their opinions on what to do to stop this accidents from being one of the things Akungba will be known for.

In interviews with AAUA Insider correspondent, students and indigenes have bared their thoughts concerning the incessant accidents happening on this road and the possible solution.

Ayobami, a student from the faculty of Law said “I believe the school should do bumbs on the road, or better still they should bring the military checkpoints to the big gate entrance.They should grade the hill that extends to the big gate, this will make the passage of vehicles easier”.

The Akungba youth President who gave his name as Mr Rotoye said he wants the indigenous association and the SUG to come together and profer solutions to this sad occurrence. Also, he wants the partnership to relay the issue before the administration and together look for a lasting solution.

A female indigene who pleaded to be anonymous said “It would be better if the authority close down the main gate and relocate it to permanent site”
.
Another Male student said “A barricade should be erected along iwaro-oka road that will stop trailers from getting to this place, and the government should find another route for these heavy trucks”

Eyebrows were raised when an accident happened on October 31st 2020, people thanked God that students were not around, little did we know that it was like a warning shot for what was to come. But did the concerned authorities hear the warning shot?

“Our parent sent us to come and study and not die, why did the school say we should be passing through the main gate alone”, a student agonised.

They say in life “change is constant”, it feels like accident is the only constant change happening on this road, while the authorities claim to be proactive and working on it.

Proactiveness doesn’t come by you writing a long and grammatically sound articles carefully, nixing it with sweet words for students and the populace to read, neither is proactiveness shown by giving empty or half baked promises to the populace. Instead it comes by taking positive actions that people can see and believe your words.

In a community where the population is dominated by students, it is the duty of the authorities to cater for the needs of both students and indigenes, as their lives and properties need to be safe guarded.

The cries of the students shouldn’t be neglected, as the presence of students make the school to exist, the school authority is only functional and recognized because of the fact that students are present in the school, no lecturer teaches an empty class. As such, student life and wellbeing should come first on the agenda of any institution.

Students believe that a round table discussion that will consider their opinions and even that indigenes should take place, as no idea is too erroneous to consider at this very critical moment.

Adekunle Oluwatobi
Adekunle Oluwatobi is a poet and a writer with a profound interest in discussions aimed at building a productive society and fostering peaceful coexistence.
He is friendly, amicable and also an ardent sports enthusiast. A lover of books and quality information, he is on a quest of reaching out to people by improving the quality of information they receive.
Read This:  How Hike In The Price Of Cooking Gas Is Making Life Hard For AAUA Students