Information reaching AAUA Insider disclosed that a fellow yet to be nabbed has opened social media handles on account of the University’s Vice Chancellor, Prof Olugbenga Ige, to defraud unsuspecting victims.

Olugbenga Ige, became the substantive Vice-Chancellor of Adekunle Ajasin University, Akungba-Akoko, on July 3, 2021 after operating in acting capacity since the retirement of his predecessor, Prof Igbekele Ajibefun.

However, messages circulating indicates that some social media handles are existing without the recognition of the Vice Chancellor. 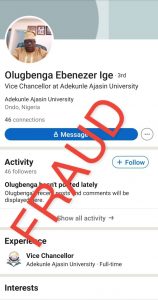 Also, a phone number -07025887040- is registered on the Truecaller app using the name and identity of Prof Ige.

On the aforementioned platforms, his pictures were used to depict that he owns the accounts.

Findings by AAUA Insider revealed that the Professor has minimal social media presence, including Facebook and LinkedIn.

As a result, the details of the Vice Chancellor available on social media is limited.

It is however surprising that the said accounts only boast of 46 followers on LinkedIn, considering the prominence of the Vice Chancellor. This indicate that the account is relatively new.

Also, Prof Ige, do not have a LinkedIn account on the platform .

A call put through to the number -07025887040- was unsuccessful, in contrast to the VC’s frequently used number.

Having denied the existence of the accounts, the general public are urged to ignore any information coming from such accounts as this factcheck has proven them to be malicious and falsified.