On Friday November 6, very early in the morning, an update on the resumption of Adekunle Ajasin University Akungba-Akoko (AAUA) was in circulation on various social media platforms.

This prompts AAUA Insider to verify the claims and authenticity of the contents in the update.

The update in circulation was with a signature that looks like that of the Acting Registrar of the University. 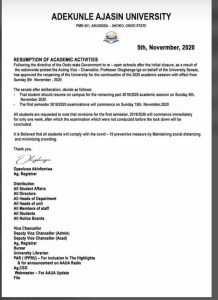 AAUA Insider discovered that the update sent earlier today has gone viral, and as such, we decided to make our findings and as such here are what we got from our findings:

I) The signature signed by the Acting Registrar is not authentic threby making the claims false.

II) The date on the said circular does not correlate with the actual date, also November was written as “novermber thereby making the claims false.

The circular is not just fake but also misleading.

AAUA Insider therefore urges all students of Adekunle Ajasin University to debunk such circular as we all await for the official resumption date from the management. We advise students to be prepared ahead of resumption.

4 Replies to “FACT-CHECK: Are AAUA students resuming on November 8?”