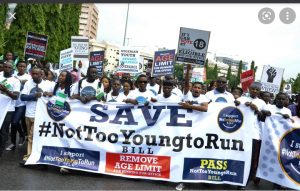 CHANCES OF THE YOUTHS AND THEIR MUST INDUCTION AS A PANACEA TO THE PROBLEM RAVAGING NIGERIAN AND HER LEADERSHIP QUALITY.

I can vividly says that all the youths who are part of the leadership of these states, are doing well and giving brilliant ideas to the Government which has contributed to the development of their respective states.
However, the Nigerian experience since independence has been a tough one, as how to get the set of leaders who are with harmonized views, ideas and zeal towards national development became more challenging due to different interests that blindfolded the Nationalists as at then. No doubt, there has been great leaders who championed the struggle for self-government in Nigeria but their number was relatively small, probably as a result of limited numbers of Nigerians that had access to Western education as at then. However, the limited number of this awareness as at then, might be the reason for the drastic reduction of ‘national patriotism’ of many Nigerians till date. The early years into the fourth republic however witnessed a slight change as more youths became politically active with the zeal to contribute their quota to the development of Nigeria and the surge continued till date.

Meanwhile, the position of the youths in Nation building is very important as all sectors of the country needs the youths in leadership positions not because of their level of brilliance and agility but also the ability to position all sectors in alliance with contemporary arrangements around the world.

In the political arena in particular, the number of vibrant youths that are being directly or indirectly deprived of leadership positions are alarming. It is understandable however that most of the youths has over the decades, refused to show capacity, but in recent times many Nigerian youths have been able to convince the world that they are capable of handling leadership positions hence the need to engage them.

The world in general has from the period of record keeping, been under the control of the youths as great philosophers who gave the theoretical and philosophical foundations to whatever we practice today (political, economic social religious academic etc), did so while they were young and agile. Those who fought for freedom of various groups across the world were youths. Various religious figures that gave the principles of communication with God and fellowship with men, were youths. It is also apparent that the youths are very instrumental to the technological advancement of the world today.

Oyindamola boladale known as MANDELA is a promising political scientist, a writer of seen and unseen wordings or ref …. with my reckons of always been awake to engage all activities in other to attain objective in their policy….. MANDELA I’M

Read This:  Make right choices for your career

Oyindamola boladale known as MANDELA is a promising political scientist, a writer of seen and unseen wordings or ref …. with my reckons of always been awake to engage all activities in other to attain objective in their policy….. MANDELA I’M