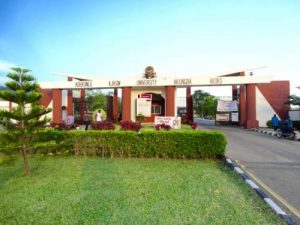 The Student Union body of Adekunle Ajasin University, Akungba-Akoko, led by Comrade Obagunwa Oluwasegun (SUPREME) has issued a 24-hour ultimatum to the Ondo State government to provide a lasting solution to the recurring accidents in the community.

This occured following the ghastly truck accident which claimed many lives including students and entrepreneurs on January 23, an incidence that irked the residents who took to the streets of Akungba on Sunday to protest and air their grievances on the recurring accidents proving menace to students of the institution.

It would be recalled that a cement-laden truck coming from Kogi state lost its control and rammed into shops close to the school’s main gate killing many. The delegates sent by Governor Oluwarotimi Akeredolu were allegedly prevented from entering the community to assess the situation, as students insisted that they wanted to see the governor.

In a press release disseminated by Adegbeyeni Oluwafemi (BARRYFEM), the Student Union bemoaned the catastrophe and commiserated with the entire student populace over the heavy loss. They further gave the State government a 24hour ultimatum to find a lasting solution to the regular accidents on the Akungba road.

Meanwhile, the release informed the student populace of the barricade erected to prevent heavy-duty truck from plying the route.

Below is the full content of the press release:

With great distress, we show our sincere condolences to the deceased and the entire student populace.
However, the best of this is to ensure our great icons do not just pass away without ensuring lasting solution to the reoccurrence of such within the student community.

-The Students’ Union has met with all necessary stakeholders and a barricade foundation has been erected today to put a total stop to heavy duty trucks plying our road.

-The union has also issued a 24-hours ultimatum to the Ondo state Government to find a permanent solution to the issue of accidents in Akungba community.

-The union is working vigorously to ensure that the lives of everyone is safe as we can never afford to lose a “pin” to any accident whatsoever anymore.

However, we therefore demand the cessation of the students from the ongoing peaceful protest as some unidentified hoodlums have almost hijacked our agitations from us, which would develop into a great disarray.

Students should await proper and further directives on the ongoing agitations as all hands are on decks.

The proper forces have been mobilized to seriously curb anyone caught in the act of violence in the name of agitations.

It’s strongly advisable that students leave the Streets so as to victoriously achieve our aims.

To cap it all, we make bold to reiterate that the Student’s Union wouldn’t tolerate any attempt to infringe the Welfare of the vast Nigerian students from any quarter. We shall always do everything in our capacity to effect smile on your face and to uphold the Students’ Union constitution.