During a protest on Monday the 22nd of November, students of the Adekunle Ajasin University, Akungba-Akoko, destroyed properties and deflated tyres at the University’s Senate Building.

According to the students, the protest is against the “No School Fee, No Examination” policy introduced by the school at the beginning of the 2020/2021 academic session.

Some students were seen armed with sticks and planks and began their protest from the Olusegun Obasanjo Multipurpose Hall, where students writing GST examinations were to collect tallies that would allow them to enter the examination hall.

In a phone conversation with the Dean of Student Affairs, Professor Akanbi, he claimed that the institution listened to the plea of the students to write their examination, but some lecturers prohibited this by chasing students out of the hall.

“The students were the ones causing the problem themselves. I was there to address the situation but they started throwing sachet water on me,” Professor Akanbi added. 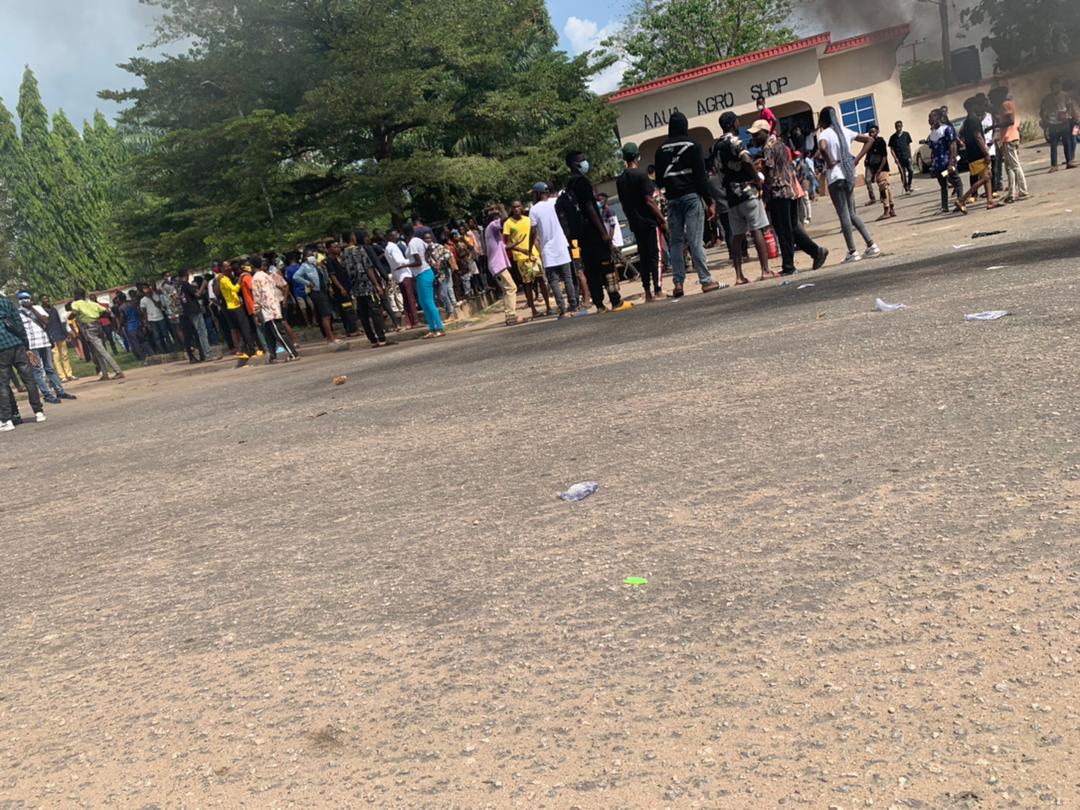 In a circular released by the University, the management directed that all students are to be allowed to sit the first semester examinations for the 2020/2021 academic session.

The circular read in part: “The management received and considered the passionate plea of the student Union leadership on the above subject matter, management has directed that all students be allowed to sit for the first semester examinations for the 2020/2021 academic session.

“However, all students are enjoined to complete their registration processes before the conclusion of their examination.” 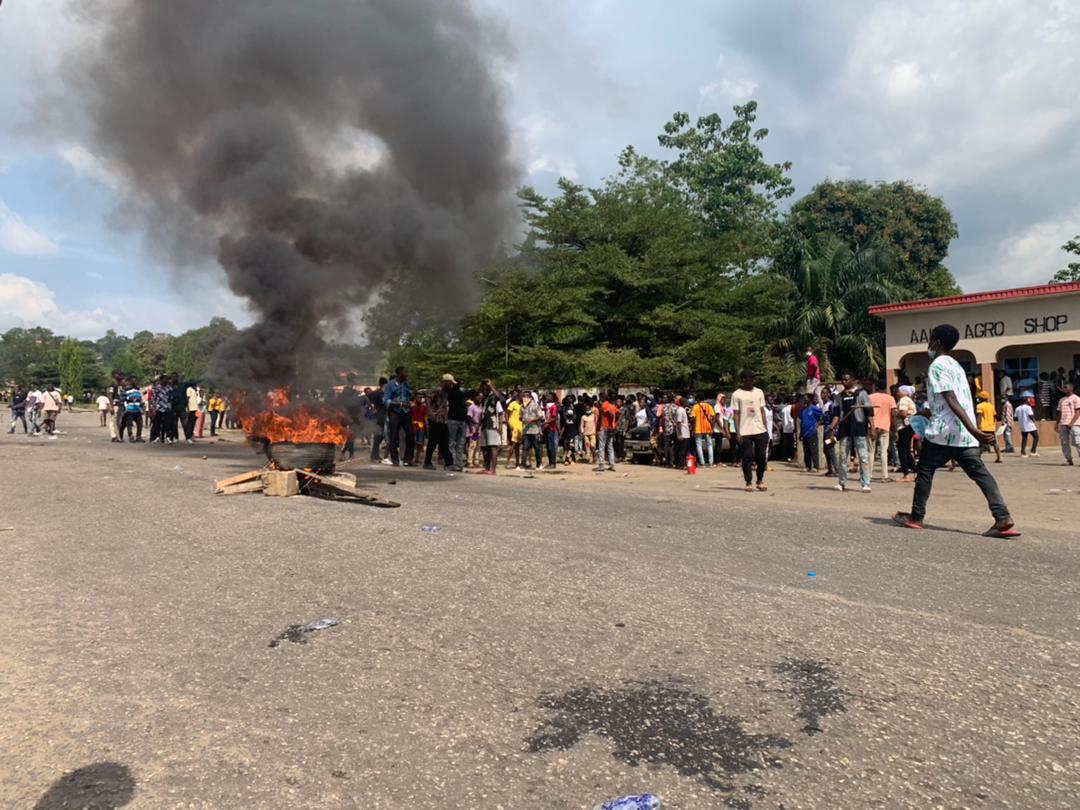 In the process of expressing their displeasure against the policy, the protesters marched to the University main gate that has been closed since January 24 after a ghastly accident that claimed the lives of students and residents of the Akungba-Akoko community of Ondo State.

After opening, the students placed woods to stop vehicles from passing the front gate. At the same time, this reporter observed that students were throwing knockouts also known as bangers at the protest ground.

In the presence of the Nigerian Police Force, the protesters lit a fire using wood and obstructed vehicles from passing the university’s main gate. 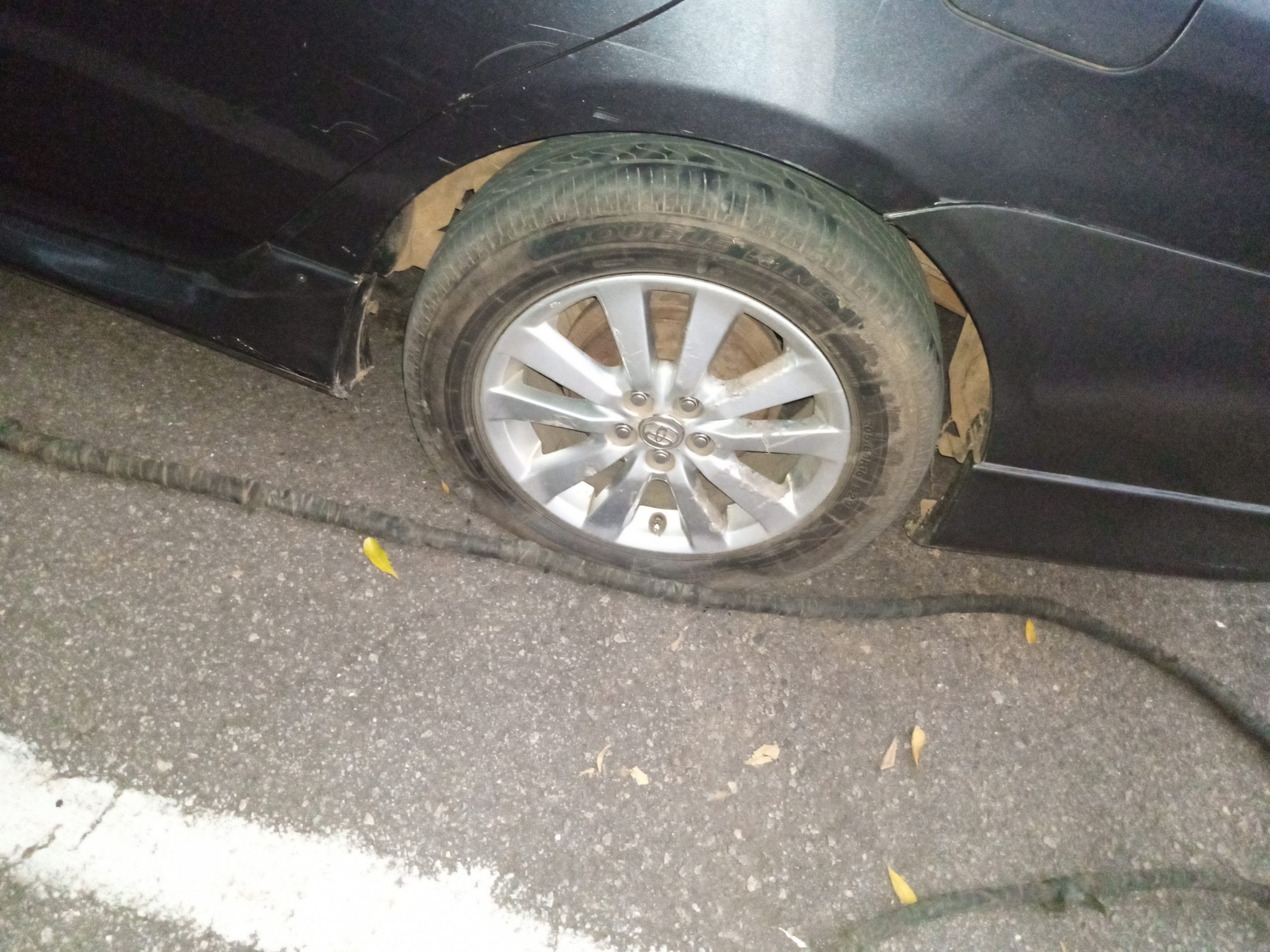 After protesting at the university’s main gate, the students extended their protest by marching to the University’s Senate Building.

Here, this reporter observed that the protesters destroyed properties like water dispensers, flower vases, frames at the reception of the Senate Building and more.

While some students were destroying properties in the building’s reception, some protesters deflated tyres of vehicles parked at the Senate Building. 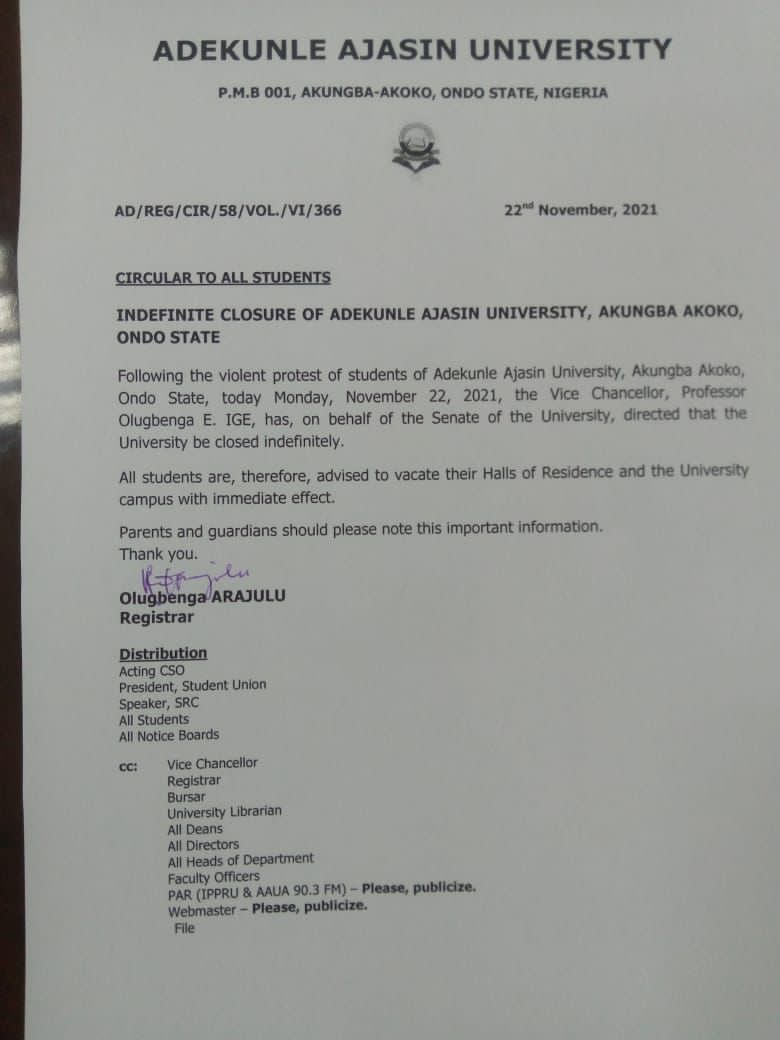 After the violent protest of the students ended at the Senate Building, the management ordered the indefinite closure of the university.

In a circular obtained by this reporter, students were advised to vacate the Halls of Residence and the university campus.

The circular read in part, “Following the violent protest of students of Adekunle Ajasin, University Akungba-Akoko, Ondo State, today Monday, November 22, 2021, the Vice-Chancellor, Professor Olugbenga E Ige, has, on behalf of the Senate of the University, directed that the University be closed indefinitely.

“All students are, therefore advised to vacate that Halls of Residence and the University campus with immediate effect.”