In honour of former AAUA Luminaries head coach, Joseph Abuo famously known as coach Igwe, who shockingly passed away in August this year, the football community in Adekunle Ajasin University Akungba have paid their respect to the history-making coach in a novelty match yesterday. 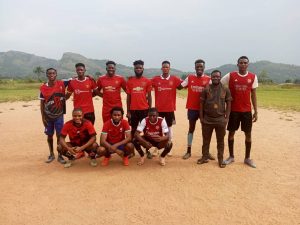 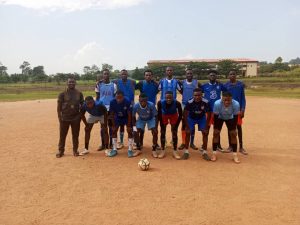 Coach Abuo made history last year when he guided the darling team of Ajasin Varsity students, Luminaries to the final of the 2021 Higher Institution Football League Championship, but sadly lost to University of Maiduguri in the final.

Thereby, AAUA Luminaries became the first state university football team to reach the semifinals of the prestigious tournament and also the first to reach the final of the competition all thanks to the exploits of Coach Abuo and his team.

He sadly passed away in August. Coach Abuo was in his early forties.

Football lovers trooped to the AAUA Sports Complex yesterday(Sunday) 30th November, 2022, to pay their tribute for the late coach, with Team Red locking horns against Team Blue, in the emotional match organized by Omorodion Emmanuel popularly known as Coach Emmy.

The match was the final of the mini-league overseen by coach Emmy but revamped to honor the late coach, who was a regular spectator at the tournament before his death.

Both teams played one-all draw after regulation and extra time as the encounter went into a penalty shootouts. However, Team Blue were the victorious side as they won 5:3 on penalties.

Speaking after the match, coach Emmy said paying tribute to the late Abuo Joseph became important because he is part of the league family and a regular visitor during matches.

“This match was organized by students and the general populace playing evening football for the past 8 months.

So we want to use this medium to pay our last respects to him. He always comes to visit us regularly and was with us 48hrs before his unfortunate death, which came as a shock to the entire university community,” he said.