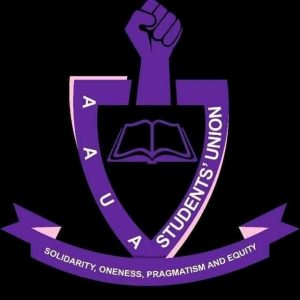 In a letter signed by the Student Union President, Comrade Ogunsannmi Kolade, he called on the Vice-Chancellor of the University, Professor Olugbenga Ige to foster an urgent meeting between the students union and the academic staff union of the institution.

According to the letter, “You will recall that the Academic Staff of University Union(ASUU) has embarked on industrial action since 14th February 2022, and this has lasted for 78 days on the day this letter was dated, in which our university Union chapter has played committed roles

However, considering the cries and fate of the over 20,000 students in AAUA, the leadership of the Students’ Union under Comrade Ogunsanmi Kolade hereby requests a meeting between the top management team and the leadership of the students union to discuss again and review the position of our university in this ongoing national concern.

Whilst we understand that the demands of ASUU are very relevant,and we have equally demonstrated solidarity with the union, we must come to a round-table meeting to discuss the fate of our university at large. We indeed appreciate your fatherly role in ensuring that the first-semester examination was completed before the university joined the strike.

We will also appreciate it if our request is considered favorably. We anticipate that you will schedule time for this meeting to hold any day between Monday, 9th May, 2022 and Thursday, 12th May, 2022. Thank you, sir.”

While speaking with the chief press secretary of the president, Comrade Olaleye Komolafe, he said the Vice Chancellor has acknowledge the letter and they await good response from him soon.